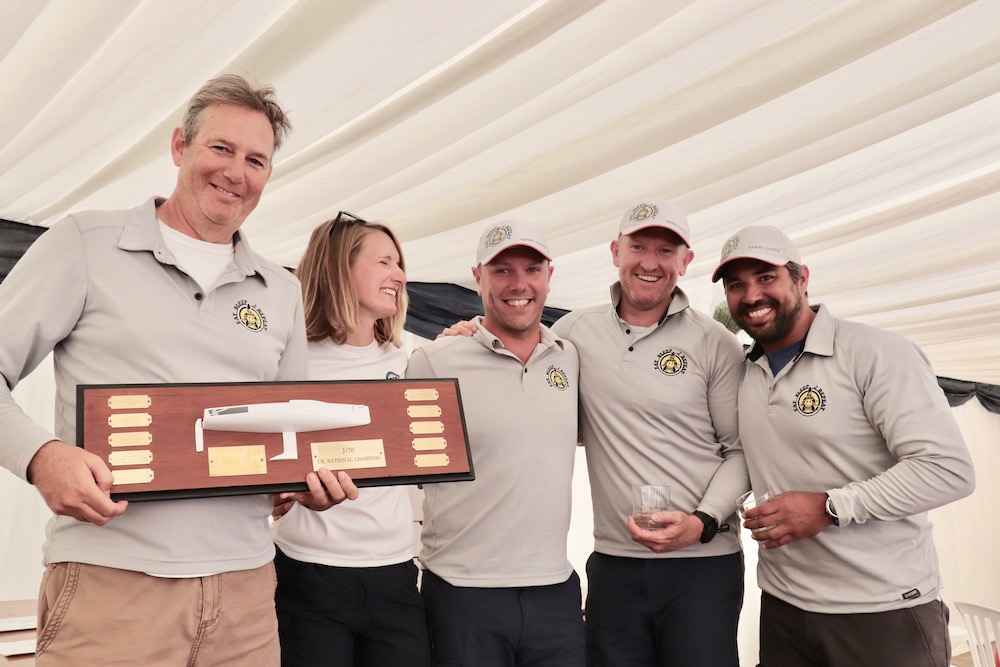 Paul Ward was awarded the J/70 UK National Championship Trophy by UK Class Captain, Hannah Le Prevost. “A big thank you to Bob Penfold and the Royal Torbay Yacht Club for all of their hard work in hosting this event. I would also like to thank all of our friends from the international fleet, which have helped us Brits to go faster! I am sure I speak on behalf of all the competitors to congratulate the race committee led by Stuart Childerley for giving us great racing in difficult conditions.” commented Paul Ward. “Looking at the trophy, it dates back to 2013, when I was thinking about buying my first J Boat. Since then I have been lucky enough to get involved with a very good team, which really enjoys being together. We have spent a lot of time sailing together and that is paying off.” continued Ward.

Ian Wilson and Marshall King won the championship in 2017, and third in 2018. “We are back with a bang this year, and this is a special one with so many great international teams competing. It was brutal out there; you made a mistake and you dropped 10-15 places, just by being slow out of a tack.” commented Ian Wilson, who is also President of the J/70 International Class. “I brought the nationals and the worlds here because it is one of the hardest places to sail in the UK if not the world – they don’t play the US Open Golf at Augusta because it is a nice easy golf course, and so we have come to Torbay. This race area rewards those that keep their head out of the boat and it punishes those that don’t.”

“We didn’t know what to expect coming here for the first time,” commented Warcanoe’s Michael Goldfarb, top team out of all 35 contestants. “The yacht club is fantastic and the race management has been very good. The conditions have been light but sailable, and we have had a great time sailing, and we are very excited for the giant turn out for the worlds.”

Racing at the Darwin Escapes 2019 J/70 World Championships, hosted by the Royal Torbay Yacht Club, will commence with a practice race on Sunday 1st September. Five days of world championship racing will follow, with the 2019 J/70 World Champions crowned on Friday 6th September. There will be up to the minute coverage as the drama unfolds at https://j-70.co.uk and via our facebook page at https://www.facebook.com/j70uk/