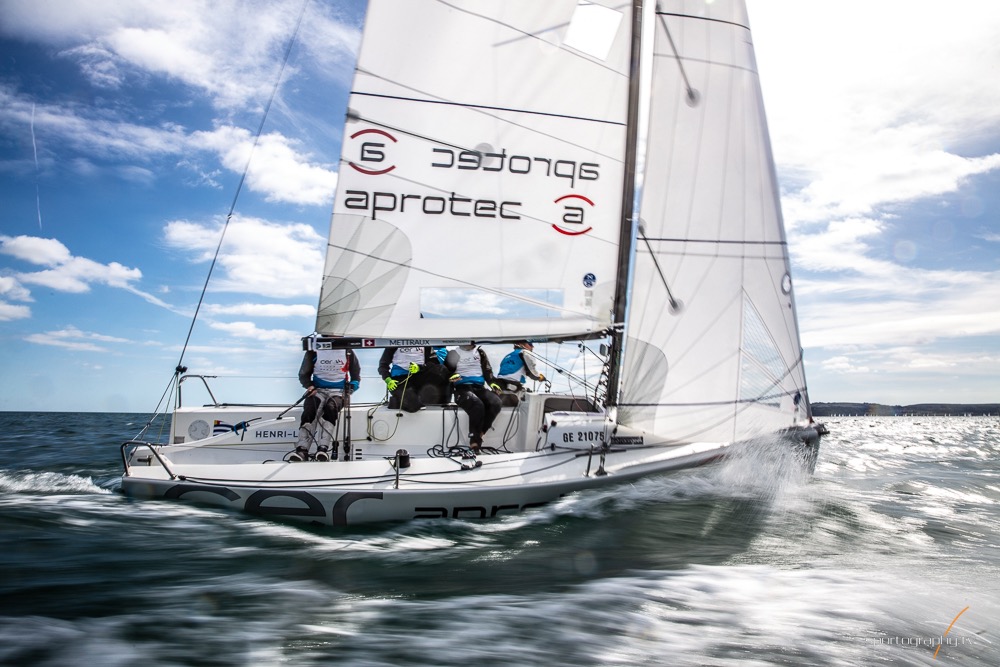 20 nations are competing for the Darwin Escapes 2019 J/70 World Championships, and teams from seven different countries occupy the top ten places after six races. The breeze for Day Two started with a stable 10 knots from the southwest, but backed south after the first race building to a 18 knots, with brilliant sunshine providing spectacular condition for the international fleet. With the wind direction and speed fluctuating, today’s results were far from stable.

After six races there are new leaders for both the Open and Corinthian classes. Alberto Rossi (ITA) racing Enfant Terrible, acknowledged as one of the best in Europe if not the world, moves up to pole position for the Open Class, after posting 1-16-2 today. Joel Ronning (USA) racing Catapult, drops to second, three points behind the leader. Boat of the day was Eat, Sleep, J, Repeat raced by Paul Ward (GBR) propelling the team to third just a point off second. Pichu Torcida (ESP) racing Noticia is only one point off the podium. In the Corinthian Class, Doug Struth (GBR) racing DSP, is the new leader. Wilson & King’s Soak Racing (IRL) discarded a Black Flag infringement in Race 5, to place second for the amateur status class, as did Denis Cherevatenko (RUS) racing Joyfull. All results are provisional pending protest decisions. There were race wins today for Alberto Rossi (ITA) Enfant Terrible, Andrey Malygin (RUS) Maria, and Peter Duncan (USA) Relative Obscurity.

Quotes from the Boats 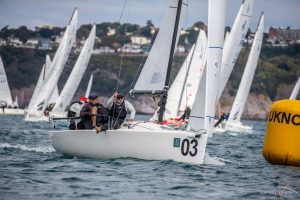 “The folks at the Royal Torbay YC, led by Bob Penfold, are doing a great job, this is a tough regatta to organise with a lot of volunteers and a lot of moving parts, and it has been seamless, they are doing a fantastic job. On Rascal we are getting it together, a bit better every day. The competition is world class and the sailing conditions are challenging, you have to keep your head out of the boat and keep on your toes. The last race today was the stand out, things didn’t work out upwind and we rounded the top mark pretty deep, but our tactician Brian Kamilar called for a quick gybe, and we got a great puff and moved up into the top ten, so it paid off in spades. Tomorrow the weather man says we will have more breeze, but Torquay seems to have its own micro-climate with its spectacular topography of climbing cliffs, I think Torquay does what Torquay wants to do!” 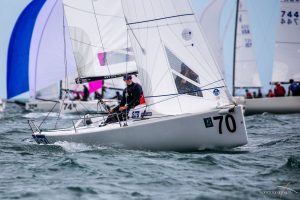 2018 J/70 UK National Champions for both the Corinthian and Open Classes.

“So far it has ben very good but we have had tricky sailing conditions, unlike the conditions we normally get in the Solent. Everyone is having the same issues with the shifty wind and awkward chop but for us so far so good. The team has been together for nearly a year and a half, and it has always been the worlds that we have been building towards, and we have been refining our roles. As with all teams we have our moments but it is all beginning to click together. I think we are better than last year, and we are pretty happy with our results so far.” 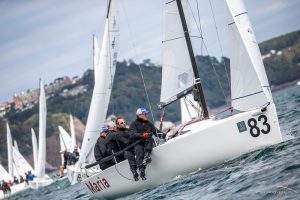 One of four Russian teams participating in the Darwin Escapes 2019 J/70 World Championship, 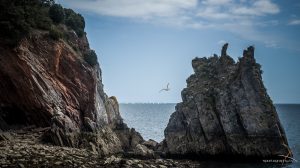 Racing at the Darwin Escapes 2019 J/70 World Championship continues Wednesday 4th September with three more high octane races scheduled in conditions predicted to be a solid 20 knots from the northwest.

Images and video courtesy of Sportography.tv